Every player, object, exit, item, and program on a MUCK has a database reference number (dbref).

A player can see the dbrefs of the things they own.

You can always refer to things by their dbrefs, but large projects will mean keeping track of many number strings, which can be cumbersome.

Redwall MUCK uses registered names (regnames) to simplify this. These are nicknames you give to the things you own. By default they are attached to your character and can only by used by you.

When you refer to a thing by its regname, use the $ prefix.

Redwall MUCK uses regions to organize and set rules for its many thousands of rooms.

If you try to use the room creation command @dig without specifying a parent region, it will often return an error.

Regions are made up of "Parent" rooms and "Child" rooms. Think of the parent as a box that contains the child rooms. Or think of it as a family tree. 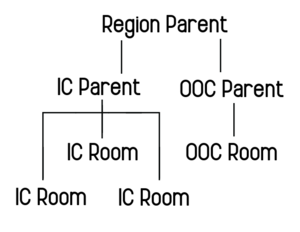 This "family" of rooms is a Region Parent with two child rooms, IC Parent and OOC Parent, each of which have children of their own.

Child rooms inherit certain rules and properties from their parent. Structuring rooms like this allows you to set rules for all rooms in a region, or specify rules for only IC rooms or OOC rooms.

Simple building projects won't require complex rules for rooms. That's okay. But it's good to know this stuff and to set up a basic parent room now to save yourself headaches later.

In this tutorial we will build a two-room home called Fox Den.

Begin by creating a Region Parent for your home.

This creates a room named Region Parent: Fox Den, with the regname $denParent. This is an OOC room.

The $~region part is a generic parent.

Region Parent: Fox Den will be a child of $~region. Ideally, you would replace $~region with a local parent using the +selectregion command, but $~region is good enough for now.

Now we will build the IC structure.

The @dig command is used to create rooms.

Exits are created with the @open command.

Everything between @open and the first = are aliases--what a player types to use the exit. Style the name however you like: {C}urly {B}rackets, <North>, (Par)en(the)ses, [ETC]

You can give an exit as many aliases as you like, each separated by a semicolon.

When naming exits, avoid using only a single letter or shorthand that will conflict with global commands on the MUCK. [F]orest would be a bad exit name, because Find uses 'f'. If it happens by mistake, no big deal. The exit can be renamed, or you can recycle it and start fresh.

You probably used this command to describe your character. It works the same for rooms.

From within the room you want to describe...

These are the success messages when a character uses an exit. They are not required.

Here is the whole thing as a script. It can be copy/pasted into the MUCK as-is and will create the project described above. The script uses @door instead of @open to create exits from afar; I gave them regnames so the @succ text could be set without knowing the dbrefs.

@desc $redroom=The walls of this room are painted brightly red.

@desc $blueroom=The walls of this room are painted brightly blue.

You do not have to script projects. New builders will likely find it easier to create projects one command at a time.

Eventually you will have a screw up and want to get rid of something. That's what the recycle command (@rec) is for:

If you want to update a room's parent, @tele will do the trick.

Now both rooms are children of Fox Den Interior, a child of the Fox Den region parent.

If you lose track of something you have created, @find can track it down.

The parentheses contain Red Room's dbref. The number string #231711 is the important bit. "R" is a flag that tells the MUCK it's a room.

The @own command will return a list of everything you own.

Locks can get complicated. +help +lock for the manual. Some useful locks:

Players can view the dbrefs of things that they own. If you get annoyed by the numbers on everything, @set me=s sets the silent flag, and you will no longer see them. @set me=!s unsets the flag when you want to view them again.